Petite Sirah and the Sierra Foothills

It's not cricket to start a blogpost with a diversion, but I have to tell you how much I admire Jo Diaz.  There's more than one blogger with a stick up their derriere, but she is not one of them.  Among other things, she is a tireless supporter of the varietal Petite Sirah, and she is simply wonderful at that.

The latest lauded Petite Sirah tasting in Alameda, "Dark & Delicious", was by all accounts a great success.  I missed it, but sent a photographer and a note-taker.  I followed up with some of the wineries, and here are some remarks worth noting:

Mark McKenna, winemaker at Andis, sent some fine commentary:   "Petite Sirah is valued by most winemakers primarily as a blending grape.  I think it is fair to say the there are very few Zinfandel or Cabernet Sauvignon wines that do not benefit from 5 - 10% Petite Sirah worked into the blend.  The risk of using too much Petite Sirah in a blend or showcasing on it's own is that it can make a wine that is a bit generic in style.  It is such a powerful grape that it can easily dominate a blend or be overly tannic and heavy on its own.  Initially, our small amount of Petite was intended to be strictly for blending.  What we found however was that the vineyards we were lucky enough to be working with produced not a heavy, overwrought version of the variety, but, instead wines of grace and complexity.  The sheer beauty and deliciousness of those early wines led us to think the wine could be very interesting on its own.

"Like many of our wines, the Andis Petite Sirah is less a result of perfect planning than open minded exploration of the wines we actually made.  We are very loyal to the philosophy of critically tasting all of our lots as they age in barrel and only then deciding what is most interesting to bottle on its own.  Our Petite Sirah program began as a single vineyard selection out of a favorite El Dorado County vineyard - Goedeck-Liu (both 2008 and 2009 bear that designation).  In 2010 we blended the Goedeck Lui Petite with Petite Sirah form the highly regarded Cooper Vineyard in Amador to produce one of our most powerful and complex wines to date," said McKenna 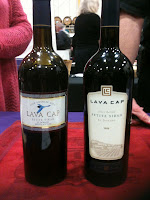 El Dorado County wines also flowed at the PS I Love You event.  Lava Cap poured its 2008 Granite Hill Petite Sirah, which and El Dorado county Estate Bottled wine.  I personally like how this wine is described on their website, because these Foothill wines are all about PLACE:  "Lava Cap’s Granite Hill vineyard has been part of our estate production since 1995. It consistently produces some of the most highly decorated Petite Sirahs in California. The wine has the iron-red soil character, black mineral depth and green conifer edge of the Sierra Foothills."

Not present at this tasting, but perhaps next year... PaZa Winery,  is the latest Sierra Foothill winery to join the PS I Love You organization.  They were welcomed aboard in January 2012.   PaZa is located in Auburn, Placer County.
Posted by Barbara Keck at 3:06 PM

THE BOOK IS NOW AVAILABLE: "Wineries of the Sierra Foothills"

You can now buy this book at our online store: http://store.wineriesofthesierrafoothills.com/ $19.95 + CA sales tax + shipping

There's nowhere else on earth like the mountains and foothills of the Sierra. The winemakers there embrace the terroir, lifestyle and pioneering spirit. Visit the wineries, experience their passion, and taste the love. Send your news, comments, photos to barbarakeck.winenewswriter (at) gmail (dot) com.